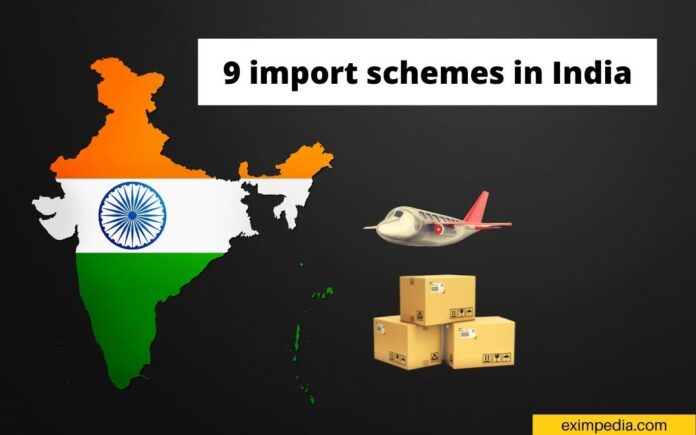 Although India wants to increase its exports to achieve its target of exporting $400 billion worth of goods from India, there are many import schemes in India for the importers’ benefit. These import schemes are mostly applicable only to the imported goods that will be used for the manufacturing of finished goods meant to be exported from the country. As an importer based in India, you must be aware of these import promotion schemes offered by the Government. Import schemes in India will boost industrial growth, contribute to the GDP, and bring more inward foreign currency after the final export process.

In the DFIA scheme, the imported goods that are the inputs that will be used in manufacturing the export product are allowed to be imported duty-free but make allowance for wastage. For example – The fuel and energy that is used/wasted for making the export product. Such wastage is determined under Standard Input Output Norms issued by the government (SION). SION will decide the DFIA that is to be given to the exporter based on inspection and report.

This scheme is applicable when you import the goods from the specific countries mentioned in the customs tariff, for example, Mauritius, Seychelles, etc at a lower or concessional duty rate after fulfilling certain conditions and requirements of customs. A certificate of origin is the most important document required to avail of this scheme. The preferential rate of duty scheme is one of the popular import schemes in India amongst new importers.

This scheme is given specifically on capital goods or goods that are used in the manufacturing process for the product that will be exported. However, while imported you must pay full customs duty on the inputs or goods imported. Also, the goods must be re-exported within 2years in case of re-export shipment. Usually, 98% of the duty is allowed for drawback but only on inspection of such goods and if the goods are used and then re-exported, in such cases drawback will be given at a lower rate or reduced rate.

DEPB schemes are considered under export schemes. However, this scheme’s focus is to reduce the occurrence of basic customs duty (BCD) on imported materials that are used in exported products. Hence DEPB scheme gives certain import benefits in India to importers. All items can be imported under this scheme except the ones that are restricted. In this scheme, the exporter is given a credit on a FOB basis which is at a pre-determined rate on duty entitlement passbook.

Under the EPGC scheme, an exporter can import capital goods at a duty-free rate. In the EPCG scheme, the exporter needs to export the finished goods worth 6 times the value of the actual duty saved in 6 years. The Indian Government promotes the EPCG Import schemes in India to improve India’s competitiveness in the global manufacturing sector. EPCG import subsidy in India is very beneficial for the manufacturers that import raw materials to get an additional cost advantage.

Manufacture under bond is given to the factories of importer manufacturers who will export goods that are produced. In this scheme, all the import duties and taxes are exempted, and customs & excise authorities supervise the production.

In Served from India Scheme, incentives are given to importers of spares, office equipment, professional equipment, and capital goods who will export finished goods when ready. This scheme is brought in by the government to promote the brand “served from India” all over the world.

We hope that you have understood everything about the import schemes in India in detail through this article.

For any queries related to import, export and business, please fill in this form or mail us at [email protected]